And where to stream them!

Animated movies are better than ever, and fans of great vocal performances are like kids in a candy store. We’ve put together a list of some of our favorite performances you can stream right now if you’re looking for a little trip into a fantasy world. We’re going to continue putting together lists of our favorites across this week, so check back in soon!

Debbie Reynolds as Charlotte A. Cavatica

This classic of animated cinema, despite a lukewarm reception in the ’70s, has become a mainstay of the VHS and digital generations. Charlotte, a barn spider, saves young piglet Wilbur (voice of Henry Gibson) from slaughter by writing messages praising him in her webs.

The understated yet powerful prose of E.B. White’s original novel was brought to life by Reynolds and Gibson, and an excellent cast of ’70s character and voice actors, including Paul Lynde, Agnes Moorehead, Don Messick (the original Scooby-Doo!), and Rex Allen. The Sherman Brothers, of Mary Poppins fame, provided songs, and Hanna-Barbera Productions animated. This lovingly-told story about change and growing up is a real tear-jerker, due mostly to Reynolds’s nuanced performance. So put this one when you’re ready to have a good cry!

Charlotte's Web can be found on Hulu 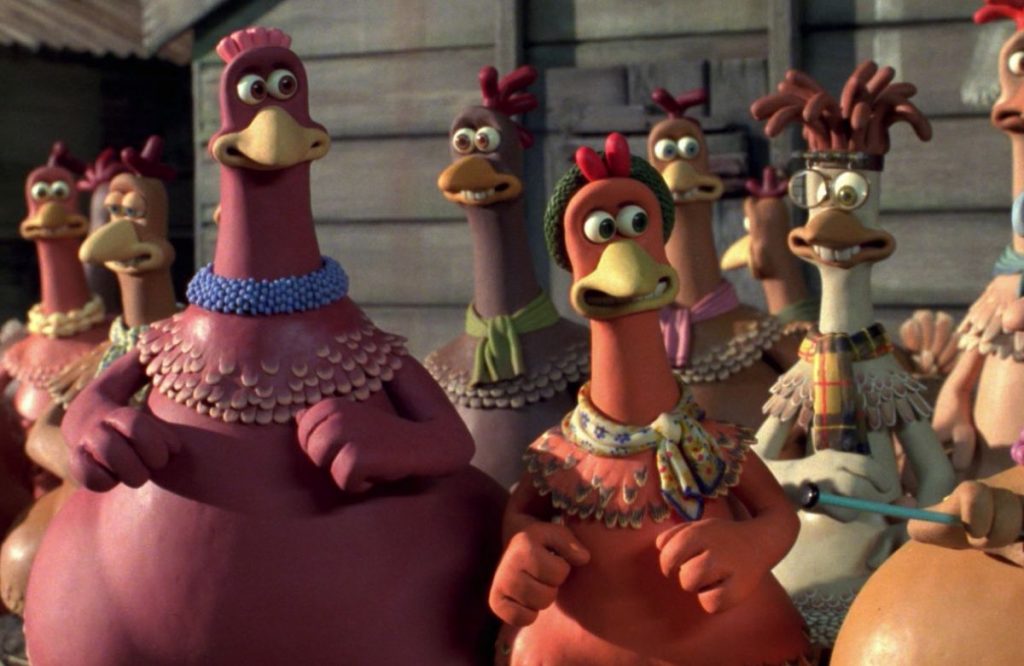 Aardman Animation’s first leap into feature films has a superb blend of all the things the studio does best: unique design, hilarious slapstick, and special effects you wouldn’t believe are animated in clay one frame at a time. Sawalha’s Ginger is a hen determined to save her fellow chickens from slaughter on a farm in the English countryside. She enlists the help of Rocky, a huckster rooster (voice of Mel Gibson), to teach them how to fly.

Because of the investment of time for stop-motion, not a single moment is wasted: all the chickens have a moment to shine brilliantly. And while Gibson brings the star-power, it’s Sawalha who unites the story with a heartfelt, passionate performance.

Chicken Run can be found on Hulu 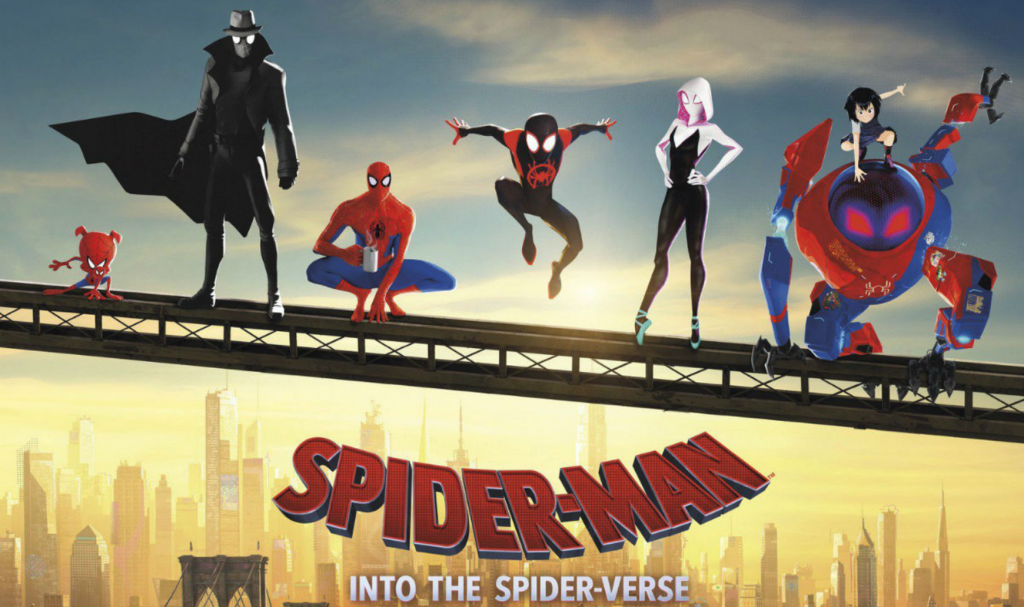 Spider-Man: Into the Spider-Verse

Shameik Moore as Miles Morales and Jake Johnson as Peter B. Parker

The comic book world of Spider-Man is so vast, it took opening up a cinematic multiverse to tell this story. Teenager Miles Morales (Moore) is bitten by a radioactive spider on the eve of the current Spider-Man’s murder. He convinces Peter B. Parker (Johnson), a worn-down Spider-Man from another dimension, to train him to fight the evil Kingpin (voice of Liev Schreiber).

Though many Spider-heroes show up in our dimension, played by the dizzying voice talents of Hailee Steinfeld, Nicolas Cage, John Mulaney, and Kimiko Glenn, it’s the chemistry between Moore and Johnson that gives the story a great comic energy and emotional grounding. The animation is a blend of 2D and 3D, plus many different aesthetics for each universe’s heroes and villains. It’s easy to see (and hear) why Into the Spider-Verse won the Best Animated Feature Oscar.

Spider-Man: Into the Spider-Verse can be found on Netflix 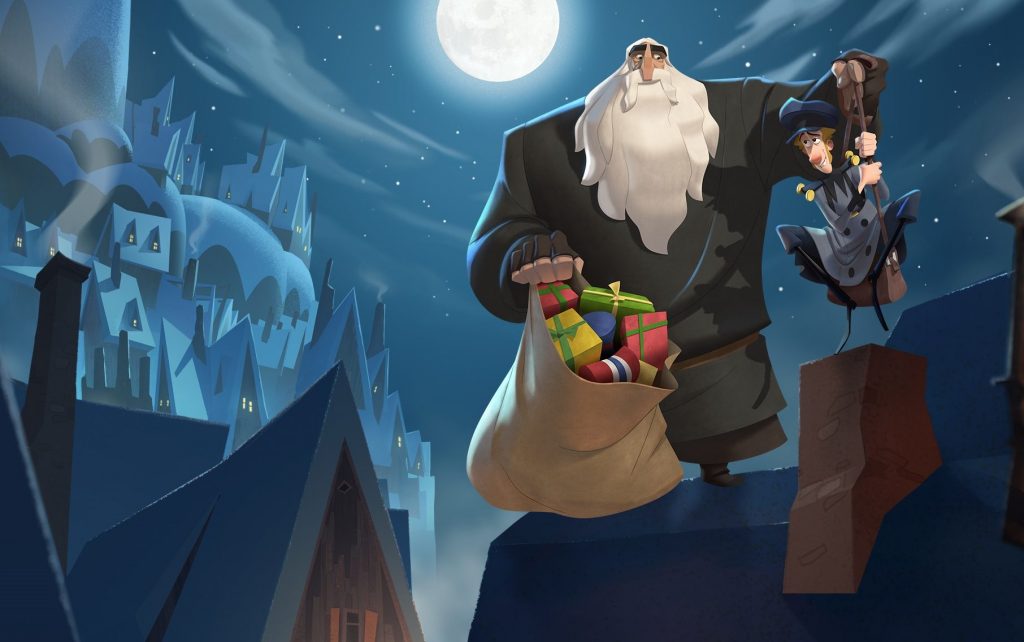 Jason Schwartzman as Jesper and J.K. Simmons as Klaus

Netflix’s first animated feature to be nominated for an Oscar tells the story of how writing letters to Santa Claus came to be a wintertime tradition. Schwartzman voices Jesper, a chatty, self-centered postal employee sentenced to setting up a post office in a remote Nordic town. Simmons is the mysterious woodworker Klaus, initially a terrifying presence, but eventually discovered to possess a talent for crafting toys.

Part of what makes the story so effective is seeing Klaus’s journey from a grumpy hermit dwelling on his pain to the man who makes Christmas the most wonderful time of the year. Simmons has a rich and subtle timbre that plays perfectly off of Schwartzman’s manic charm. If this isn’t a holiday classic already, it will be soon!

Klaus can be found on Netflix 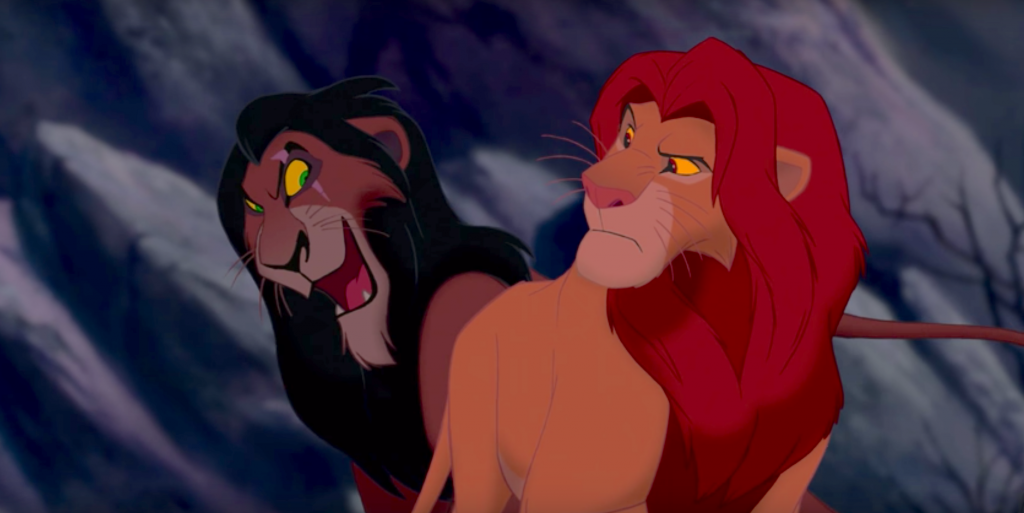 Irons reportedly smoked like a chimney during the sessions (the ’90s were such a different time!) but we’d like to stress that you can maintain an evil growl without any harmful habits. Nevertheless, when you sit down to watch this film, Be Prepared to get carried away by some great dark charisma.

The Lion King can be found on Disney+ 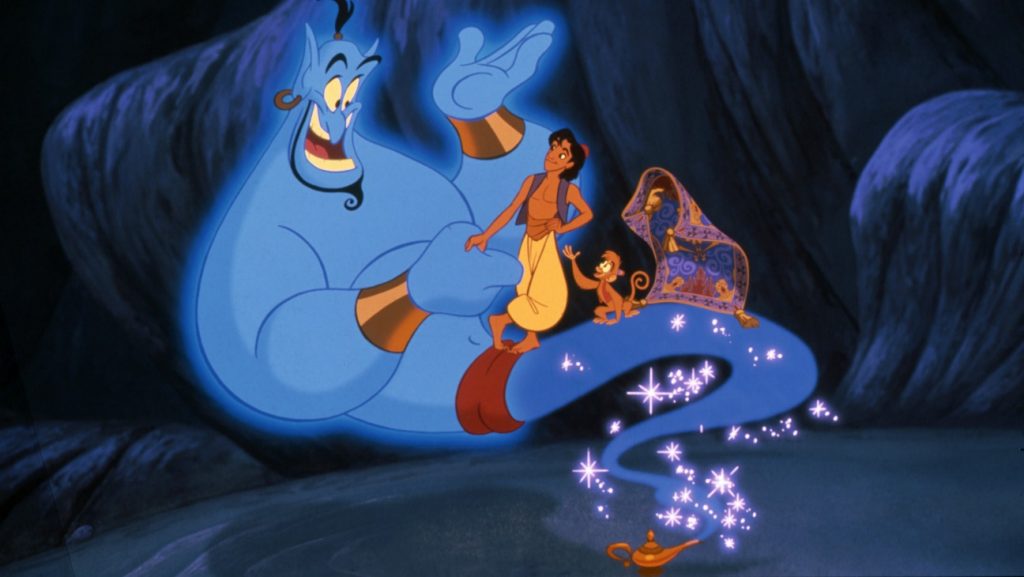 Robin Williams as the Genie

There are vocal performances. And then there are performances with so much range, you’d swear there were ten other people in the booth. It’s safe to say Robin Williams elevated the visibility of the craft of voice acting with his powerhouse portrayal of the all-powerful Genie in the Magic Lamp.

The Genie helps his friend Aladdin become rich and famous, get out of a bad scrape, and finally realize you don’t need to be someone you’re not to find happiness. All the while, the Genie’s cracking jokes and popping in and out of impressions with the speed and dexterity of a concert pianist. Williams’s performance is a joy to witness and a beautiful testament to his talent and heart.

Aladdin can be found on Disney+

You can totally hear her right now, can’t you? Eleanor Audley has the distinction of voicing two iconic Disney villains: Maleficent in Sleeping Beauty and the evil stepmother Lady Tremaine in Cinderella, in addition to the disembodied psychic Madame Leota in the Haunted Mansion. 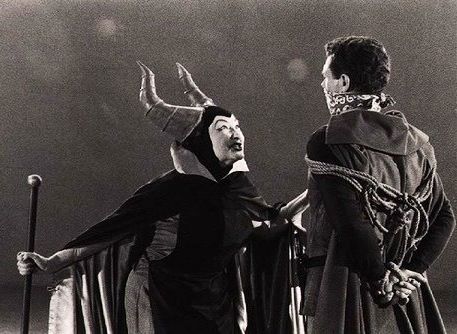 Audley also provided an on-camera rotoscoping reference for her animated characters, so her voice and theatrical facial expressions are melded perfectly into the character. Her fingerprints are all over the very idea of playing a villain, and it seems we’re all just trying to reach the platonic ideal of Maleficent’s icy magnetism.

Sleeping Beauty can be found on Disney+ 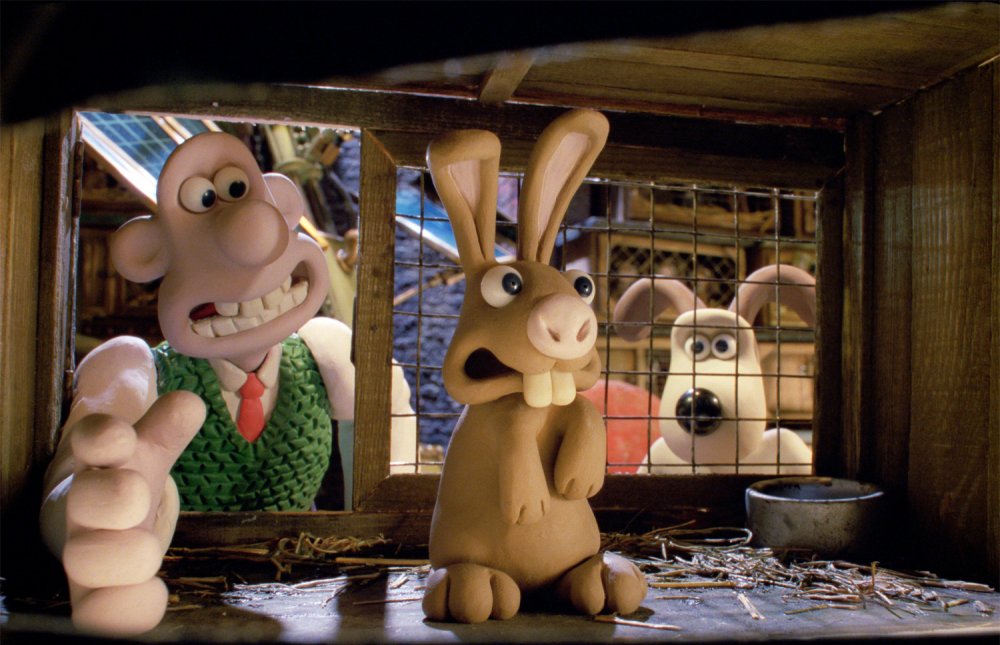 Wallace & Gromit: Curse of the Were-Rabbit

We couldn’t mention Aardman Animation without bringing up the characters who made the studio famous: absent-minded inventor Wallace and his genius dog Gromit. The first stop-motion short featuring the pair premiered in 1989 after seven years of production. Peter Sallis agreed to the role (the only speaking part in the short) for a £50 donation to his favorite charity. He played Wallace as a genteel eccentric always on the lookout for cheese, and always surprised the difficult scrapes he gets into are resolved (usually with Gromit’s intervention).

To his surprise the short was a smash success, winning a BAFTA, and launching a franchise that includes four shorts, this Oscar-winning feature, and many spin-offs and cameos. Curse of the Were-Rabbit finds Wallace and Gromit as humane pest-control agents rescuing a village infested with rabbits during a vegetable competition—all with a horror B-movie spin of course.

Wallace & Gromit: Curse of the Were-Rabbit can be found on HBO Go and HBO Now 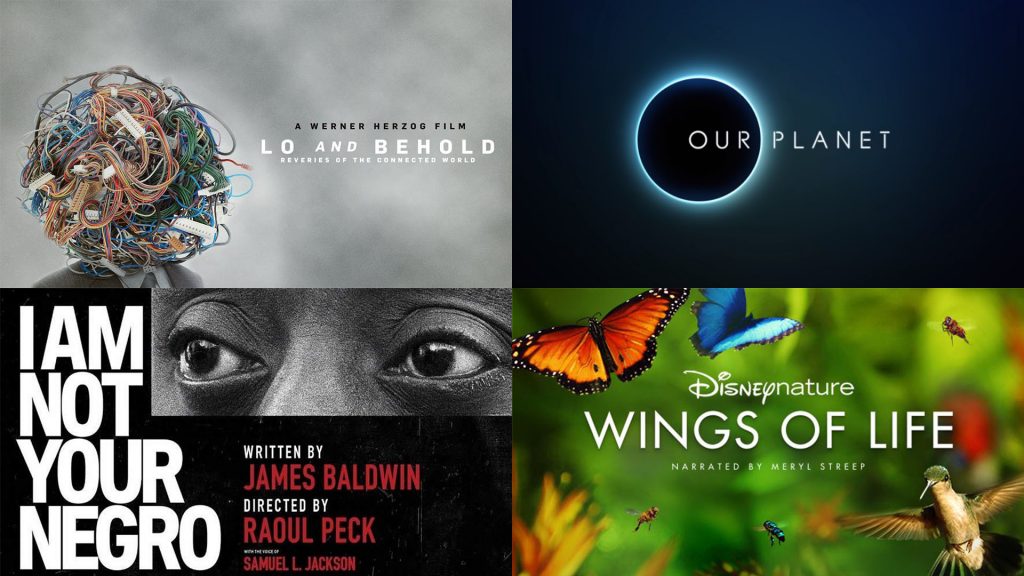 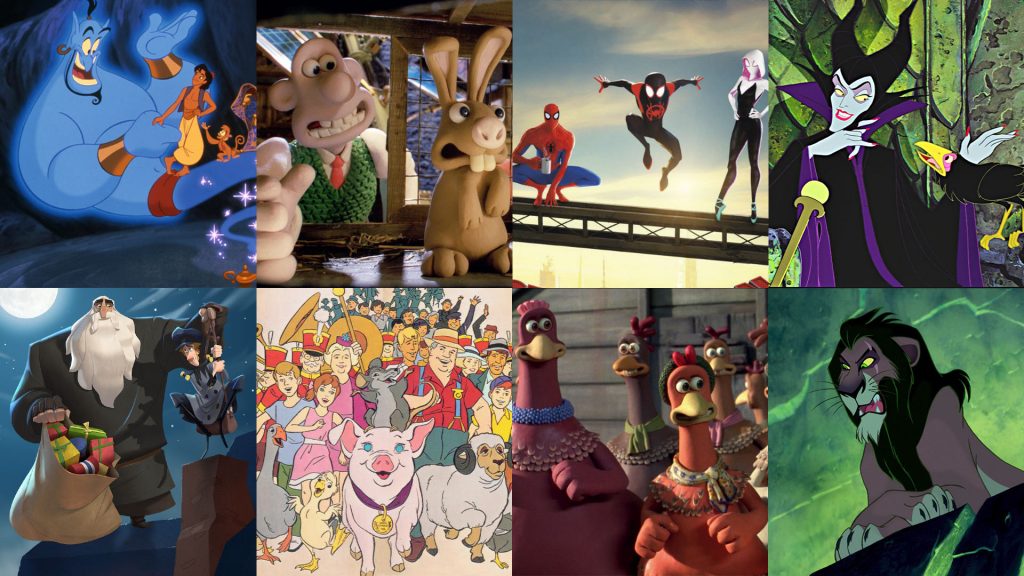